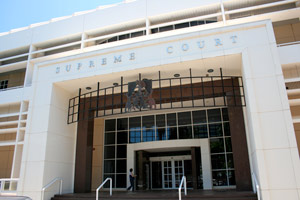 The building which houses the Supreme Court today was opened in November 1991. It occupies a site of 1.08 hectares, has a gross floor area of 14,256 square meters and contains 11 courtrooms, Judges Chambers, Associate Judger's Chambers, Library, Sheriff's Office, administrative offices and a coffee lounge that is open to the public. The building serves a population of approximately 121,000 and a geographical area of 716,200 square kilometres.

When the State Square development was being planned, it was recognised that the Supreme Court building and adjacent Parliament House should harmonise in design whilst retaining their individuality. In keeping with the dignity of the Court and in acknowledgement of the Darwin climate, both classical and tropical elements were incorporated in the design; colonnades and verandas, shade devices, large overhanging eaves and lattices in substantial masonry walls throughout. 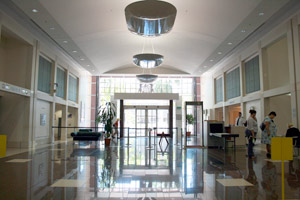 A striking feature of the foyer is the polished brown granite, a local stone from Mt Bundy, used in the impressive stairway each side of the entrance to Court 1 and for the flooring of the foyer and front veranda. In the foyer the granite has been accented with white reconstituted marble from South Australia.

Australian timbers have been used extensively in the courtrooms, the criminal courtrooms being predominantly silver ash and beech, and the ceremonial court a more traditional jarrah and brushed box.

The ground level (Level 2) houses two criminal courts, an appeal court, lobby areas, a sunken foyer, a public coffee lounge, jury rooms, interview rooms, robing rooms, the Sheriff's Office and the Supreme Court Registry. Level 3 contains the gallery to Court 1, and the administration area. Level 4 contains courtrooms, interview, press, police and mothers rooms.
Levels which, for security reasons, are not open to the public are Level 6 (which contains Judge's Chambers, Associate Judge's Chamber, court reporting facilities and a library for the use of Judges, court staff and practitioners) and Levels 1 and 5 (which consist mainly of secure parking and plant areas).